Airblue Flight ABQ-202 was scheduled to fly a domestic flight sector Karachi – Islamabad. The aircraft had 152 persons on board, including six crew members.

The aircraft took-off from Karachi at 0241 UTC (0741 PST) for Islamabad. At 0441:08, while executing a circling approach for Runway 12 at Islamabad, it flew into Margalla Hills, and crashed at 9.6 NM, on a radial 334 from Islamabad VOR. The aircraft was destroyed and all souls on board the aircraft, sustained fatal injuries.

Both the crew members were adequately experienced, possessed valid licenses, were rated for the type, and medically fit to undertake the flight on 28 July 2010.

Certificate of Airworthiness: valid up to 6 February 2011

Aircraft daily inspection / servicing was carried out on 28 July 2010 prior to the flight ABQ-202 and no defect was recorded. No anomaly in the aircraft system performance was recorded before and during the flight till the aircraft flew into Margalla Hills

A hilly area lay to the northeast of Benazir Bhutto International Airport (BBIAP), Islamabad. The city of Islamabad is to the North-west and Rawalpindi is to the South-west of the aerodrome. There are 2 prohibited areas near the airport: OP(P)-254 to the southwest and OP(P)-277 to the northeast Islamabad Airport is a joint user airfield. Air Traffic Services (ATS) are provided by CAA and PAF in their respective areas of jurisdiction. Chaklala Tower is manned by PAF to provide aerodrome Control Services, whereas CAA Radar is providing radar vectoring services to arrival and departing aircraft in the designated airspace. Airfield layout includes one main runway with no parallel or usable secondary surfaces

The following is the Jeppesen chart for the ILS DME RWY-30 approach. It also contains the circle-to-land minimums.

This diagram shows that a 45° track change is used to leave the final approach course to go and intercept the downwind leg. The time to execute this break-off leg should be 30 seconds, including turns.

According to this same document, the Airbus A321 is a category C aircraft. Its maximum speed for visual manoeuvring (circling) is 180 kt. The groundspeed used for the determination of the visual manoeuvring area is based on an ISA+15° temperature, altitude 1,000 feet above the airport elevation and a 25-knot wind. These conditions for Islamabad airport and a category C aircraft give a maximum groundspeed of 220 knot for a circling approach. The maximum distance travelled in 30 seconds is therefore 1.85 NM. 6.6.5 Therefore, the maximum distance between the runway centreline and the downwind leg is 1.3 NM, if the above recommended procedure is followed.

The published circle-to-land MDA is 2,510 feet for category C aircraft. The corresponding visibility is 2,400 m. According to ICAO documentation (DOC 8168), the visual manoeuvring area for a circling approach is determined by drawing arcs centred on each runway threshold and joining those arcs with tangent lines. The radius of the arcs is related to: 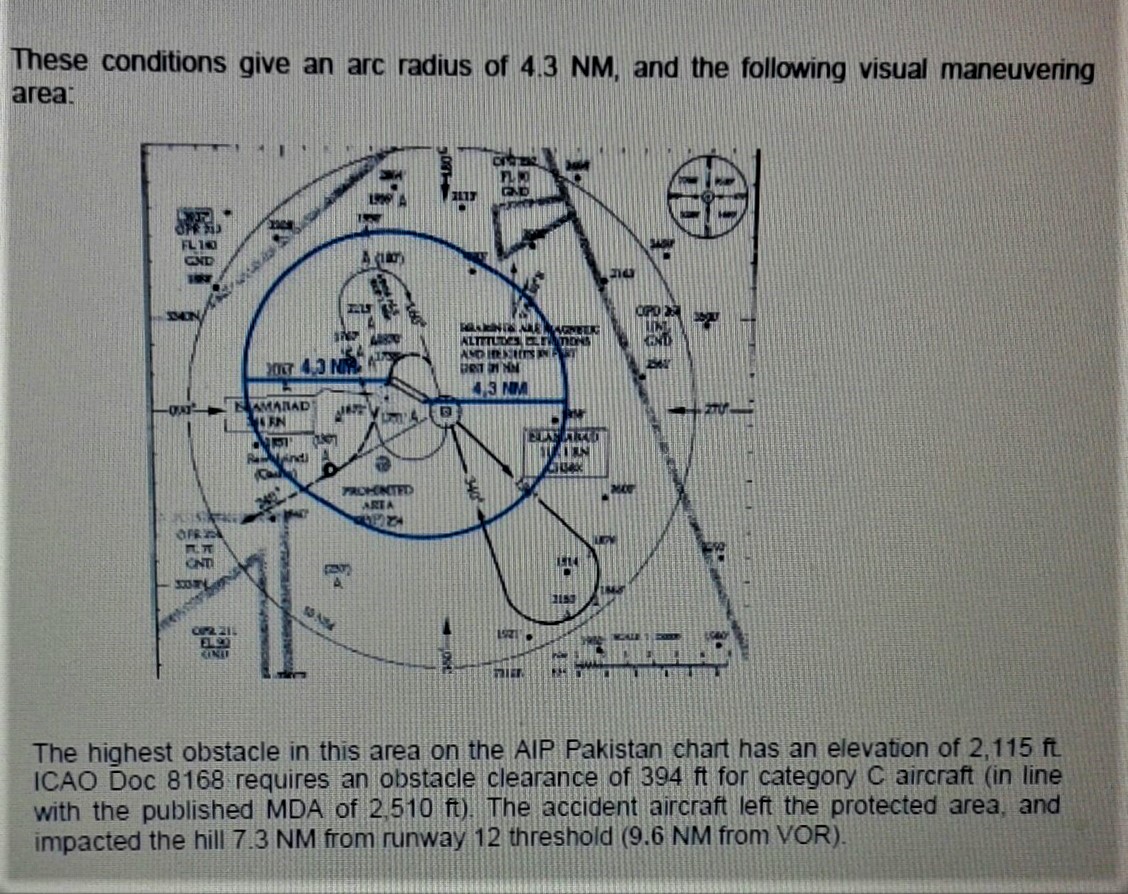 The weather observation reports (METAR) at BBIAP, Islamabad on 28 July 2010 at various hours is as follows: Time in UTC 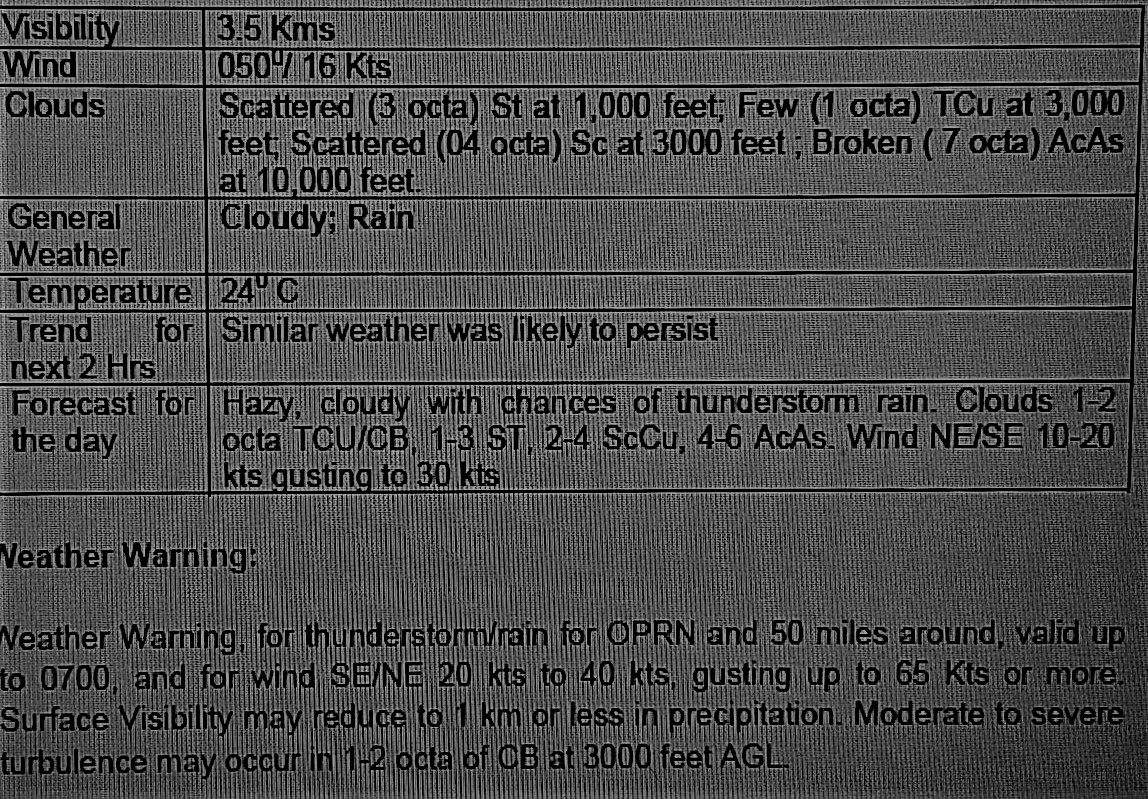 Islamabad weather at 0441 (time of crash)

The Civil Aviation Authority immediately launched an investigation into the accident. Airbus stated that they would provide full technical assistance to Pakistani authorities. A six-member Airbus team, headed by Nicolas Bardou, the company’s director of flight safety, arrived in Islamabad on 29 July 2010.

The aircraft’s flight recorders were located on 31 July, when Junaid Ameen, the director-general of the Pakistan Civil Aviation Authority, told AFP that “the investigating committee found the black box from the Margalla Hills this morning … the black box was found from the bulk of the wreckage of the crashed plane.” He stated that the box would be examined by “foreign experts” in Germany or France as Pakistan does not possess the equipment to decode the flight recorders. He also stated that the process of extracting information may take six months to a year.  The Pakistani authorities decided to send the CVR and FDR to the Bureau d’Enquêtes et d’Analyses pour la Sécurité de l’Aviation Civile (BEA) in France.

Sequence of events leading to the crash

The Pakistan Civil Aviation Authority (PCAA) issued the final report in November 2011. It covered the key events that lead to the crash.

*PBD-10 = Waypoint, Place/Bearing/Distance. Waypoint coordinates in latitude and longitude are fed into the computer

0435:44-at an altitude of 3,700 feet, the aircraft was established on the ILS with both autopilots engaged. The crew extended the landing gears.

0436:20-the crew again asked ATC Tower “how’s the weather right downwind” The tower controller responded that the right downwind was not available and that only left downwind for Runway 12 was available.

0436:33-the Captain wanted to descend to 2,000 feet, but was reminded by First Officer of 2,500 feet (Minimum Descent Altitude), indicating possible intentions of Captain.

0437:03-the crew levelled the aircraft at an altitude of 2,500 ft., autopilot 2 was disengaged and the crew flew the aircraft on a constant heading until the RN VOR with only autopilot 1 engaged.

0437:26-the confirmation by the Tower for the safe landing of PK-356 (aircraft of a competitive airline) in the same weather conditions put the Captain under further pressure to ensure a landing at Islamabad under any circumstances.

0437:27-the break-off to the right, after the ILS approach was delayed due late visual sighting of Runway 30 caused by poor visibility. ATC also called visual contact with AB-202 and asked AB-202 to report established left downwind Runway 12.

The procedure requires the pilot to make an ILS approach to Runway 30 and break off at circling minima altitude and circle to land on the opposite end of the runway, Runway 12. This procedure should be hand flown and not on the autopilot always keeping the threshold of the landing runway, Runway 12 in this case in sight. So, the aircraft has to stay clear of clouds but not below the minimum altitude specified and keep a tight circling pattern to remain within the confines of the safety area. The elevation of Islamabad airfield is 1665 feet, so the aircraft has to stay 845 feet (2510-1665 = 845 feet) above ground level in this manoeuvre. — Mohammad Syed Husain

0437:36-the Captain asked First Officer to activate secondary flight plan, which was activated in the FMS.

After break-off from ILS approach, the Captain ignored the tower controller’s suggestion (at 0437:54) to fly a bad weather circuit by saying “let him say whatever he wants to say”. The CVR recording and flight simulation show that the Captain probably decided to fly a managed approach on pre-selected PBDs unknown to the ATS.

0438:01-although Captain said that he was going for NAV Mode, yet the aircraft kept on flying on HDG mode. First Officer reminded “Okay Sir, but are you visual?”

0438:47-the Captain while preparing for intended approach pattern, said to First Officer “passing (waypoint) “PBD11” they would take flaps 3 and Flaps full”.

0439:32–as the aircraft was more than 3.5 NM from the runway centreline; abeam the threshold of Runway 12 with a heading of 352°, the crew commanded a left turn to 300° through the autopilot.

0439:58–the aircraft was 5 NMto the north of the aerodrome and the first EGPWS predictive “TERRAIN AHEAD” caution was recorded on the CVR.

First Officer told the captain“this Sir higher ground has reached, Sir there is a terrain ahead, sir turn left”.

By now the Captain had become very jittery in his verbal communication and displayed frustration, confusion and anxiety resulting in further deterioration in his behaviour.

0440:10–tower controller asked the crew if they were visual with the airfield. The crew did not respond to the question, whereas, First Officer asked the Captain (on cockpit Mic) “Kia batauon Sir?”(What should I tell him Sir?)

0440:16-on the insistence of Radar Controller, the Tower Controller asked the crew if they were visual with the ground. Captain and the First Officer responded to the controller “Airblue 202 visual with the ground”.  First Officer again asked Captain “Sir terrain ahead is coming”. The Captain replied, “Han ji, weare turning left” (Yes, we are turning left). Whereas aircraft was not turning,only the Heading (HDG) bug was being rotated towards left. At the same time, two EGPWS predictive “TERRAIN AHEAD” cautions were recorded on the CVR. The pilots were unsure of their geographical position and did not seek Radar help. The consequent loss of situational awareness caused the aircraft to go astray.

0440:28-lateral mode was changed from NAV to HDG, 40 Seconds before the impact. At this stage, current heading of aircraft was 307 degrees, the aircraft started to turn the shortest way to the right towards Margalla hills by default.

From that time onward, several EGPWS predictive “TERRAIN AHEAD PULL UP” warnings were recorded on the CVR until the end of the flight. The aircraft had ended up in a dangerous situation because of most unprofessional handling by the Captain. Since the desired initiative of First Officer had been curbed and a communication barrier had already been created by the Captain, the First Officer failed to intervene, take over the controls to pull the aircraft out of danger and display required CRM skills.

0440:33-the thrust levers were moved forward to the MCT/FLX detent (instead of TOGA position) and the auto-thrust (A/THR) disengaged.

0440:35-the selected altitude was changed to 3,700 feet and the aircraft started to climb. The aircraft was still turning right.

0440:39 (within 06 seconds), the thrust levers were moved back to the Climb (CLB) detent and the Auto Throttle (A/THR) re-engaged in climb mode. The selected altitude was reduced to 3100 ft.

0440:41—First Officer asked the Captain yet another time “Sir Pull Up Sir”.

At 0440:46, autopilot 1 was disconnected. The roll angle was 25° to the right. The captain applied full left side stick along with a 6° left rudder pedal input and the aircraft started to turn left. The altitude was 2,770 feet and increasing. During the last few seconds, the aircraft did climb to 3,090 feet. The Captain put in 52 degrees of bank to turn the aircraft, and made some nose down inputs. Therefore, the aircraft pitched down, speed increased and auto thrust commanded the engines to spooled down to keep airspeed on the target speed. The aircraft started again to descend at a high rate.

Unfortunately, in his panic, until 0440:46 the Captain continued to move the HDG bugwithout looking at it, but failed to pull the knob to activate. When he did activate it, the aircraft turned towards the HDG bug that had been rotated overly to 025 Degrees until end of recording, and at 0440:49,

Captain said to First Officer “left turn kiun naheen ker raha yar?” (Why the aircraft is not turning to left?).

0440:52–the Captain started to make pitch down inputs. The roll angle was 30° to the left. The pitch attitude was 15° nose-up and started to decrease.

0441:01–an EGPWS reactive “TERRAIN TERRAIN” warning was recorded on the CVR. The roll angle reached its maximum value of 52° to the left.

The high rate of descend at very low altitude could not be arrested and the aircraft flew into the hill and was destroyed. All souls on board sustained fatal injuries due to impact forces.

Air blue crash has been finalized as a case of Controlled Flight into Terrain (CFIT), in which aircrew failed to display superior judgment and professional skills in a self-created unsafe environment. In their pursuit to land in inclement weather, they committed serious violations of procedures and breaches of flying discipline, which put the aircraft in an unsafe condition over dangerous terrain at low altitude.