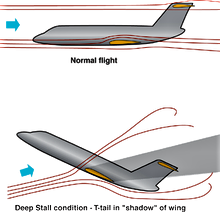 After acquiring Private Pilot’s Licence and continuing with Commercial Pilot Licence training, we were taught after dual instruction to practice stalls when solo in the training area but not below 3000 feet AGL. They were to be either clean (flaps and gear up), in the landing configuration (flaps and gear down) or with take-off flaps (gear up).

We learnt that you need maximum power for either slow or high speed flight.

The Cessna 150 had a fixed undercarriage

The airplane was a Cessna 150, and aircraft AP-ATZ, stalled in the same attitude. You knew about the stall from the vertical speed indicator (VSI) as the aircraft mushed (sank in the flying attitude). Aircraft, AP-ATB,  dropped a wing at the stall angle followed by nose drop, but we were taught only to apply the rudder to correct this while attending to the stall.

I have never encountered a stall while flying on the line, though on one occasion on base leg, just prior to turning final in a B720, I felt the airplane shudder. I could not account for this for the speed was correct for the flaps and the bank angle, but do remember relaxing pressure on the control column as I turned final and called for full flaps. After landing,  and at the tarmac it turned out we had lost a big chunk of the right inboard flap. One passenger could not control himself and had dashed out of the airplane as soon as the steps were connected. He had witnessed the broken piece falling off.

We had a night stop at Lahore, the aircraft was repaired and a test flight with the engineers was done by me in the morning. My copilot, Group Capt S. A. Aziz had been the Principal of the Airline Flying Academy I had graduated from. The aircraft, AP-AZP (Zulu Papa), later went on to acquire notoriety when it was hijacked in March 1981 on a scheduled flight from Karachi to Peshawar and flown to Kabul, Afghanistan on gunpoint. A passenger, an ADC to former Prime Minister Bhutto was slaughtered inside the aircraft cabin and the body kicked out of the airplane from the rear entry door. The aircraft was then flown to Damascus, Syria where the aircraft and occupants were released on a ransom paid of released miscreants flown to Damascus on another airline aircraft. The Afghan and Syrian Governments were most uncooperative during the entire episode and sympathetic to the hijackers.

Important: On another occasion at rotation speed (just when you pull the nose up for takeoff) during a heavy weight take-off in a B707 freighter from Orly, Paris with a stiff crosswind blowing, I tried to lift the airplane off the runway and felt the stick shaker (control column vibrates). My copilot immediately grasped the lower part of the control column to prevent further rotation, but I wasn’t pulling back. The stick shaker ceased and we continued the climb out. The stick shaker came on probably because of the faster rotation rate, since the airspeed never dropped, but was  constant and continued to build up. The idea was to prevent the airplane from settling down on the runway due to the crosswind, so a deliberate measure of lifting the airplane off was applied, which is applicable to light planes only.

I promised myself I would never try pulling the aircraft off the runway irrespective of the crosswind any more and the lesson was learnt immediately.

On another occasion, at Orly Airport after an Atlantic crossing from Stewart Airport in New York State, the weather was thunderstorm at Orly. We checked the fuel for a diversion to Frankfurt near Top of Descent or probably a little earlier, and found that it was insufficient for diversion. Captain Saeed Khan was with me that day on a New York route familiarization trip but was sitting on the jump seat in the cockpit.

The dispatcher had erred in conveyance of  the flight plan from Kennedy Airport in the required fuel for the flight which included the reserves.

The approach was conducted in rain with gusts hitting the aircraft. The airport was open and visibility was not a problem but there was a crosswind blowing across the runway. We touched down on the runway but the aircraft ran to left side, from where the wind was coming. I didn’t apply much correction for that and it corrected itself; the aircraft resumed a straight course on the runway.

It was a close thing.

Twice during my career, flying the 707s, I encountered loading errors on takeoff. On one occasion, I was lucky. The aircraft lifted off by itself after V1, and it was an effort to hold the nose down to maintain speed. I had to take assistance from Capt. Qadir, who was sitting on the right seat and doing an R/F for the Gulf Area on that flight. We were going to Dubai initially. I mentioned this in the debrief report and also had the aircraft checked on arrival at Dubai.

It was taken up by our flight operations department, but I received a letter from the Chief Pilot Technical that the matter was under review and I was not to worry. They had simply helped out a traffic staff who did the trim sheet.