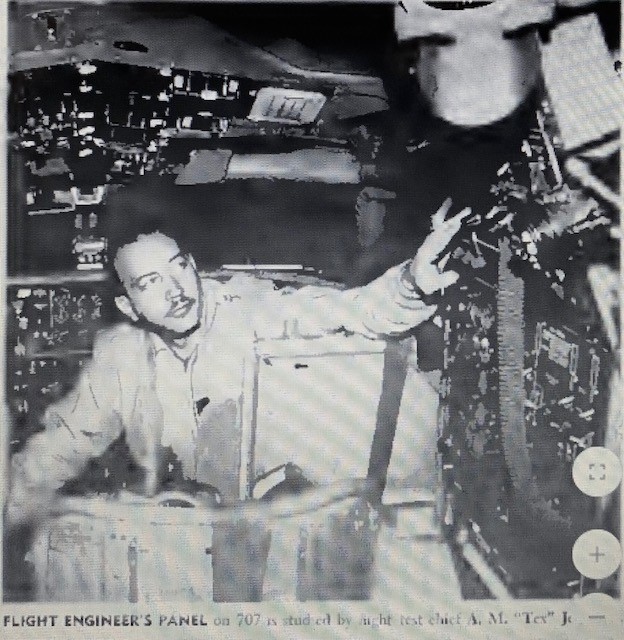 Garden City: In spite of its higher performance and greater weight, the. Boeing 707 jet transport is less work to fly than equipment currently in service, according to A.M. Tex Johnston, chief of flight test for Boeing. Johnston amplified earlier reports of the 707’s handling characteristics with an address before a meeting of eastern members of the Air Line Pilots Association here. The 707 is somewhat harder to land in a crosswind than current aircraft he said. This is the characteristic of the planes with the swept wing. The upwind wing is more efficient than the one downwind because the airflow across it is chord wise, while the flow across the downwind wing is span-wise. The difference in lift thus produced imparts a downward rolling moment. Johnston said the 707 is easier to handle in this respect than other swept wing types he has flown because its spoilers can destroy much of the lift of either wing, and the pod pylons have same effect as fences limiting span wise flows. The rolling moment is not great enough to endanger a wing tip or pod. Its effect is to lengthen the landing roll out. With the downwind landing gear bearing most of the airplane’s weight, the upwind gear produces less braking action because of its reduced traction.

The landing gear tread of the 707 is somewhat narrower than that of our current airplane types because it is necessary to retract the big four-wheeled bogies into the fuselage. There is no engine nacelle on the wing offering storage space for them. The relative narrowness does not affect the crosswind capability of the plane according to Johnston.

Brake System
The 707 has a brake anti-skid system to prevent a wheel or bogie bearing a lighter friction load than the rest of the wheels from being stopped by brake pressure, thus wearing tires unevenly. This occurs – without the anti skid system – when a crosswind partially unloads the upwind bogie when icy spots are encountered on the runway, when black top runway surfaces melt in spots on a hot day, etc. Given the weights the 707 will operate, no pilot could hope to sense wheel skid and make pedal corrections, Johnston said.
The thrust reverser to be installed on the 707 will be about as effective braking units as the reversible pitch propellers now in use, he reported. They have an efficiency of about 50%. Tests of a fixed version of the reverser mounted on the number two engine have been limited to taxi speed of 80 knots because at higher speeds the asymmetrical reverse thrust scrubs the nosewheel sideways. Reverser control will be a separate lever on the control pedestal because Boeing wants to avoid a complicated throttle linkage.
A prototype of Boeing’s noise suppressor mounted on a single outboard engine for tests has been found to reduce the noise level 12 decibels or 17% of the noise level of the unsilenced engine. Johnston showed a film of the empty 707 holding altitude in a fly over at 290 knots with three engines out and only the silenced engine operating.
Regarding the performance of the 707 at altitude, Johnston said that no angle of bank of 45 degrees is necessary to make a standard rate turn (three degrees per second) at the expected cruise altitude and an indicated airspeed of 205 knots. He suggested for the sake of passenger comfort it may be desirable to use half-rate turns in holding patterns and instrument let downs. He acknowledged that the resultant expansion of the holding pattern may cause traffic control problem,

Lateral Control System
The lateral control system of the 707 includes spoilers, inboard cruise ailerons and outboard low speed ailerons. The system gives the airplane a rate of roll of about 36 degrees per second at cruising speeds. The control linkage to the outboard ailerons is broken when the flaps are up and then remain fixed in neutral with the inboard ailerons and spoilers producing all lateral control at high speeds. The configuration was chosen to prevent aileron reversal which occurs high subsonic Mach numbers. The area and travel of the inboard are small to limit the possibility of reversal and they provide adequate control in event of a spoiler failure.
The swept wing configuration of the airplane increases lateral controllability because a small amount of slip or skid causes flow on the forward wing to be nearly chordwide than that of the after wing. The resultant lift differential tends to roll,the airplane into balanced flight. Lateral and directional controls are both effective at stalling speed.
All controls are manual with aerodynamic boost except the spoilers which are hydraulically powered. The spoilers can be extended differentially for lateral control or symmetrically as speed brakes. While in use as speed brakes they can be used for lateral control by differential retraction. Spoiler extension does not produce a strong pitching moment.

Pilot Technique
The landing attitude of the 707 is nose high. Recommended technique is to push the nosewheel down immediately after touchdown and extend the spoilers. These actions spill the lift off the wing and place 80% of the airplane’s weight on the wheels for effective braking immediately.
Johnston said that while the 707 changes trim radically as speed changes, there is little effect on trim from power changes. This means that full power can be applied quickly for a go around without obliging the pilot to fight heavy control forces. Trim changes caused by air flow separation at high subsonic Mach numbers is also relatively slight. A small negative pitching moment is experienced rather than usual pitch up.
Johnston said that in early test phases a considerable buffet was caused by separation at the rudder. On one occasion the buffeting was violent enough to rip the flight engineer’s panel from its mounts. A fix has since been made, he reported.

The area of the 707 has been limited to prevent too sudden recovery from turbulence induced yaws. The propeller-driven Stratocruiser recovered with a snap and shudder that was sometimes unsettling to passengers.

There is no washout in the wings to the 707. Camber varies from station to station along the span of the wing and this is believed adequate to prevent tip stalls in normal operations.
Johnston said that the climb out in the 707 is made at 300 knots until increasing altitude brings the Mach number indication for that speed down to Mach 0.80 (about 30,000 feet). The remainder of the climb is made at Mach 0.80. At maximum gross weight the 707 reaches 35,000 feet in 30 minutes.
The 707 is capable of extremely rapid let-downs in the event of a pressurisation failure. The procedure is to reduce power, extend the spoilers to decelerate to 270 knots and extend the landing gear. With the wheels down, the pilot may accelerate to the landing gear placard speed of 310 knots and let down at 14,000 feet per minute with the cabin angle no greater than 30 degrees. Constant flow oxygen masks for the passengers drop out of the ceiling if pressurisation fails. Oxygen quantity is adequate to supply a full load of passengers for a period equal to roughly half the time range of the airplane at 20,000 feet. Range is penalised by cruising at any lower altitude.
By courtesy