The driving factors of the most recent airliner developments have been communications and cockpit technologies, structural techniques and materials and, perhaps most importantly, the vital necessity to reduce fuel burn and minimize the environmental impact of air travel. Airbus and Boeing followed very different strategies for their new airliner development plans, initially addressing different markets, before aligning themselves for renewed competition. Elsewhere, the Chinese ARJ21 and the Russian Super Jet perhaps ushered in a new era in airline manufacturing, while Bombardier’s C Series and Mitsubishi’s MRJ are setting the standard for the regional jets of the future.

Boeing struggles to bring the revolutionary 787 Dreamliner to service, but such trials are to be expected when a manufacturer pushes airframe and aero technology to its limits. Its product line for the twenty-first century also includes the 747-8 and the 737 MAX.

During the late 1980s, and through the 1990s, Boeing and Airbus expressed very different philosophies in airliner development. Boeing believed that the future of air travel lay in large fleets of medium-capacity aircraft capable of covering medium-to long-haul routes at high speed and great efficiency. It proposed that such aircraft would provide ‘point-point’ services, eliminating connecting flights and some regional travel.

Airbus was of a contrary opinion. It saw a need for an airliner much larger even than the 747-400, to satisfy the growing demand for air travel, especially in the Middle East and Asia-Pacific regions. Boeing offered the Sonic Cruiser as its answer to these future requirements, while Airbus created the A380. Discouraged by airline reaction to the Sonic Cruiser, Boeing turned to a new design that would revolutionize large aircraft structures, introduce a new concept in power plant and power systems, and offer a step change in economy. 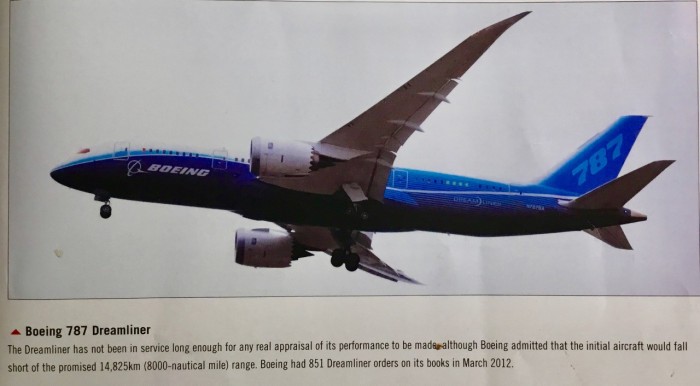 Launched on 16 December 2003, the 7E7 was described as being constructed primarily from composites. It would be powered by a new generation of engines, powering aircraft systems through electrical generation rather than the high pressure bleed air normally used, for considerable fuel savings. In another first for Boeing, the aircraft would be produced in subassemblies by a global supplier network, for final assembly in the United States. Maturing as the 787 Dreamliner, the design was ambitious, groundbreaking and, as it turned out, fraught with risk. It was initially to be built in 223-seat 787-8 and 259-seat 787-9 variants.

Boeing struggled with its supply chain, even going to the extreme of buying some of its subcontractors so that it could ensure the quality and timeliness of their work. First flight was delayed time and again, but after remedial structural work, the first 787 finally became airborne in December 2010, powered by Rolls-Royce Trent 1000 engines. As test airframes continued to fly, the first General Electric GEnx-1B powered machine flew in July 2010, but then an inflight fire caused further delays. Boeing was finally able to deliver its first customer 787-8 to ANA late in 2011, albeit a slightly inferior aircraft as the company works to meet all its range promises.

Boeing belatedly decided to enter the market for a high-tech, high-capacity airliner, announcing a major redevelopment of the 747-400 as the 747-8 in 2004. With a stretched fuselage and revised wings, featuring the raked wingtips of the advanced 777 variants, the aircraft would be powered by GEnx-2B67 turbofans and available in 747-8I (Intercontinental ) and 747-8F (Freighter) versions.

Forging ahead against the backdrop of disappointing orders, Boeing overcame unforeseen problems with the 747-8 to fly the first -8F in February 2010. Cargolux became the first 747-8 operator in October 2011, while Lufthansa was preparing to become the type’s first passenger operator in April 2012.

Having invested hugely in the 787/746-8 and A380 programmes, respectively, neither Boeing nor Airbus had the stomach for designing a new single-aisle narrowbody to replace the world’s 737 and A320 fleets. However, under intense pressure from the airlines, Airbus announced its re-engined A320neo in December 2010 and Boeing was eventually forced to respond.

Boeing’s 737 MAX combines the CFM LEAP-B engine with an aerodynamically refined wing and other improvements, to offer an 18% reduction in fuel burn compared to the most efficient single-aisle in service today. It will be available for service from 2017. 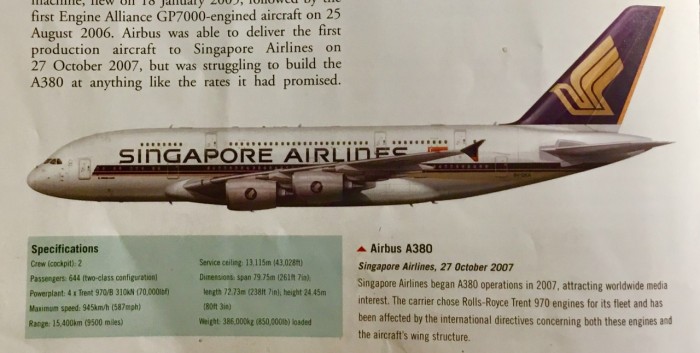 Airbus proceeded with its A380 ‘super jumbo’, but then had to abandon plans for an upgraded A330 and design the all-new A350 XWB to compete with Boeing’s Dreamliner.

Airbus had addressed the medium-and short haul markets by the late 1980s and work was in progress on a new long-range airliner, but it had never challenged Boeing’s monopoly of the very large airliner market. In 1988 it therefore began examining the possibilities for a high-capacity machine and in 1994 these possibilities were transformed into detailed planning for a future A3XX.

Work continued so that Airbus was able to launch the new type on 19 December 2000, as the A380. With double-deck cabins, it was immediately stunning and the scope of Airbus’s ambition was further revealed when details of the aircraft’s advanced part-composite construction and modular avionics system were revealed. It was also clear that the new aircraft would help fuel a revolution in inflight entertainment (IFE) facilities, as Airbus set about creating exciting cabin concepts for the leviathan.

The first A380, a Rolls-Royce Trent powered machine flew on 18 January 2005, followed by the first Engine Alliance GP7000-engined aircraft on 25 August 2006. Airbus was able to deliver the first production aircraft to Singapore Airlines on 27 October 2007, but was struggling to build the A380 at anything like the rates it had promised.

Expensive and time-consuming changes had to be implemented not only to the production line, but also to the company’s management structure. Eventually Airbus was able to bring the A380’s weight issues and problems with its wing wiring looms under control, and by 2011 it was able to begin approaching the production rates it had hoped for from the outset.

The A380 has suffered continuing bad publicity with an inflight engine failure on a Qantas aircraft, plus a series of minor cracks in wing structural members, but by April 2012 fixes for all the aircraft’s issues were in hand. In general, the airlines and their passengers are extremely happy with the A380. 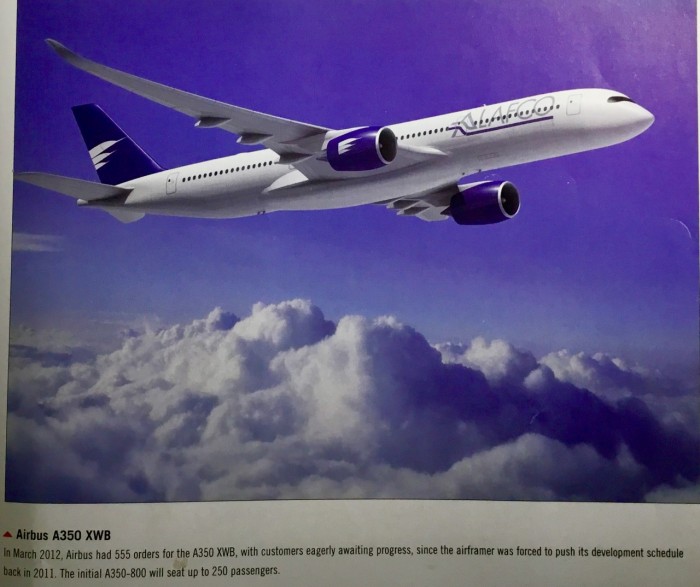 With the majority of its design effort focused on the A380, Airbus was content to allow an upgraded A330, designated A350, to compete with Boeing’s promised 787. When it presented the new machine to the airlines, their reaction was lukewarm at best. Airbus was therefore forced to go back to the drawing board, ultimately arriving at the A350 XWB – Extra Wide Body. Offering a little more cabin width than the 747, the new A350 uses a majority of composites in its structure, and will seat between 270 and 350 passengers in three variants.

Powered by the Rolls-Royce Trent XWB engine, the A350 XWB has suffered delays, but should achieve first flight in the 2013-14 timeframe, with deliveries from 2014-15 onwards. The first airframe entered assembly for static test in 2012, with assembly of the first flying A350 XWB scheduled to begin in summer 2012.

Airbus finally bowed to pressure from the airlines and major leasing outfits for an improvement in A320 efficiency late in 2010. The ‘neo’ improvements will be applied across the A320/A321/A319 range, and principal among them is the option of two new generation powerplants. CFM has been chosen to to supply its LEAP-X derivation of the CFM56, while Pratt &Whitney is offering its PW1100G PurePower geared turbofan. The aircraft will also dispense with the traditional wing tip fences, replacing them with tall winglets, which Airbus refers to as ‘sharklets’.

Airbus claims a 15% reduction in fuel burn for the A329neo over the current-build aircraft and aims to deliver the first new in 2015.

Bombardier had been joined by a handful of new companies in the race to produce not only the next generation of regional jet, but also a new breed of mainline aircraft.

The 2000s saw the emergence of several new airliner designs. With the exception of Bombardier, one of the manufacturer involved would have readily sprung to mind as builders of jet airliners, and industry opinion remain divided on whether all or any of them will survive long enough to achieve commercial success. 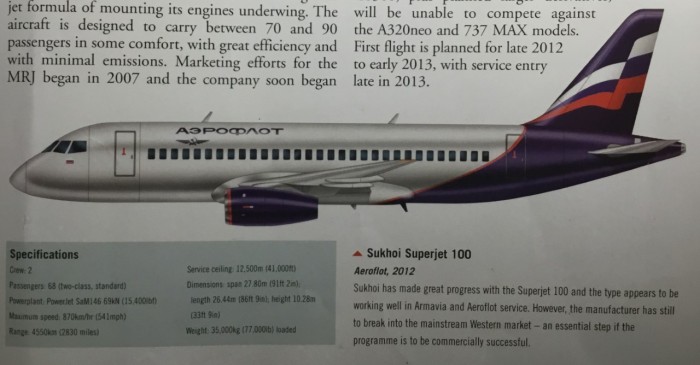 Sukhoi took the brave step not only of entering into an unfamiliar market, but also of introducing a new engine on its new aircraft. The company came to an agreement with Italy’s Alenia Aermacchi to help it avoid the lack of international marketing expertise, customer service and maintenance facilities that have traditionally afflicted Russian airline designs. It also chose a Russo-Italian engine, the SaM146 turbofan, developed by Snecma/Saturn PowerJet consortium to power the 98-seat aircraft.

The first Sukhoi Superjet 100 (SSJ100) completed its maiden flight on 19 May 2008 and although the test schedule suffered delays, the first production aircraft entered service with Armavia early in 2011, with Aeroflot receiving its first aircraft in June that year.

Russia’s Irkut is also working on a new airliner design, its MS-21 taking its first orders in 2010 and being firmly aimed at the Tu-154/Tu-204 and 737/A320 replacement markets. The popular PW1000G engine has been chosen to power the design and a number of Western contractors selected to provide systems and equipment. First flight is tentatively scheduled for 2014 with customer deliveries pushed back from 2016 to 2017.

The Commercial Aircraft Corporation of China flew its first ARJ21 prototype on 28 November 2008. Already delayed, the programme then suffered further problems and a particularly difficult 2011. The certification effort was continued into 2012. Some industry commentators have suggested that the ARJ21 is a little more than a modernized MD-80, based on airframe technology acquired when the American type was built under licence in China but the proliferation of modern systems and the aircraft’s CF34 engines show how far the 90 seat has progressed.

COMAC is also investing heavily in the C919 ‘trunk liner’, a 168-seat mainline aircraft that the company as a challenger to the A320neo and 737 MAX. It will be powered by LEAP-X1C engines and make extensive use of Western systems. Bombardier has announced that it is working closely with COMAC on the C919 and some systems and technologies are being co-developed for the CSeries. First flight has been scheduled for around 2014, with first deliveries in 2016, but given the delays suffered by the rather less ambitious ARJ21, these dates must be seen as optimistic.

Mitsubishi chose the PW1000G PurePower engine for its regional jet which adheres to the ‘new’ regional jet formula of mounting its engines underwing. The aircraft is designed to carry between 70 and 90 passengers in some comfort with great efficiency and minimal emissions. Marketing efforts for the MRJ began in 2007 and the company soon began amassing orders. However the type’s first flight which has been scheduled for April 2012, was postponed early that month to an unconfirmed future date, while at least one industry expert has suggested that the programme has ‘stalled’.

Bombardier’s CRJ struggled in the regional jet market as soon as Embraer launched its EJets and in 2005 the Canadian company began offering its CSeries to the airlines.  It then abandoned the project for lack of a suitable powerplant. Pratt & Whitney came to its rescue with the PW1500G geared turbofan however, and in 2008 the programme was relaunched. Orders have been slow to materialize and some pundits remain convinced that the 100-seat CS100 and 130-seat CS300, plus planned larger derivatives will be unable to compete against the A320neo and 737 MAX models. First flight is planned for late 2012 to early 2013, with service entry late in 2013. 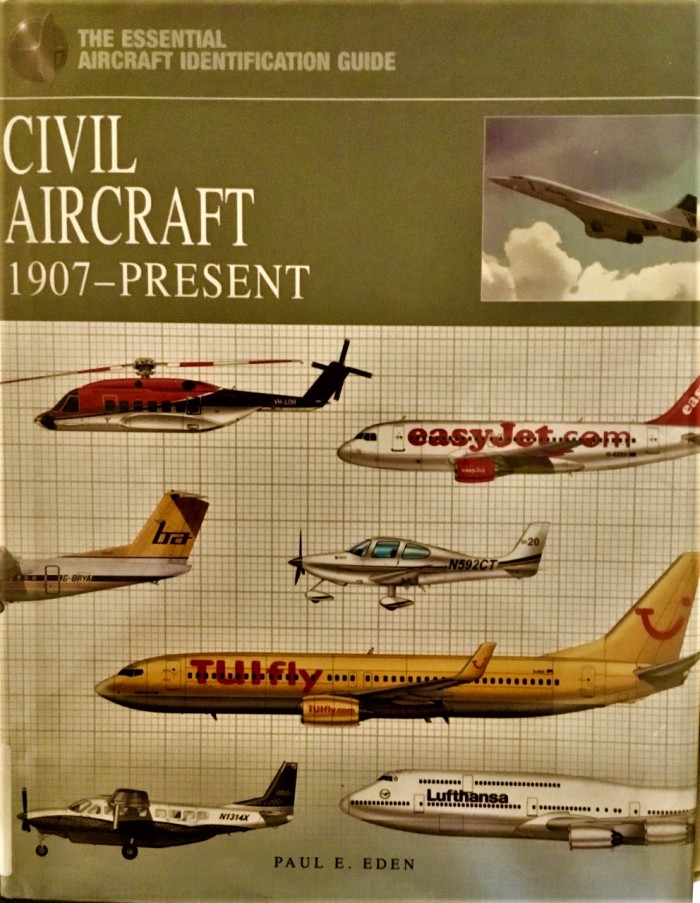