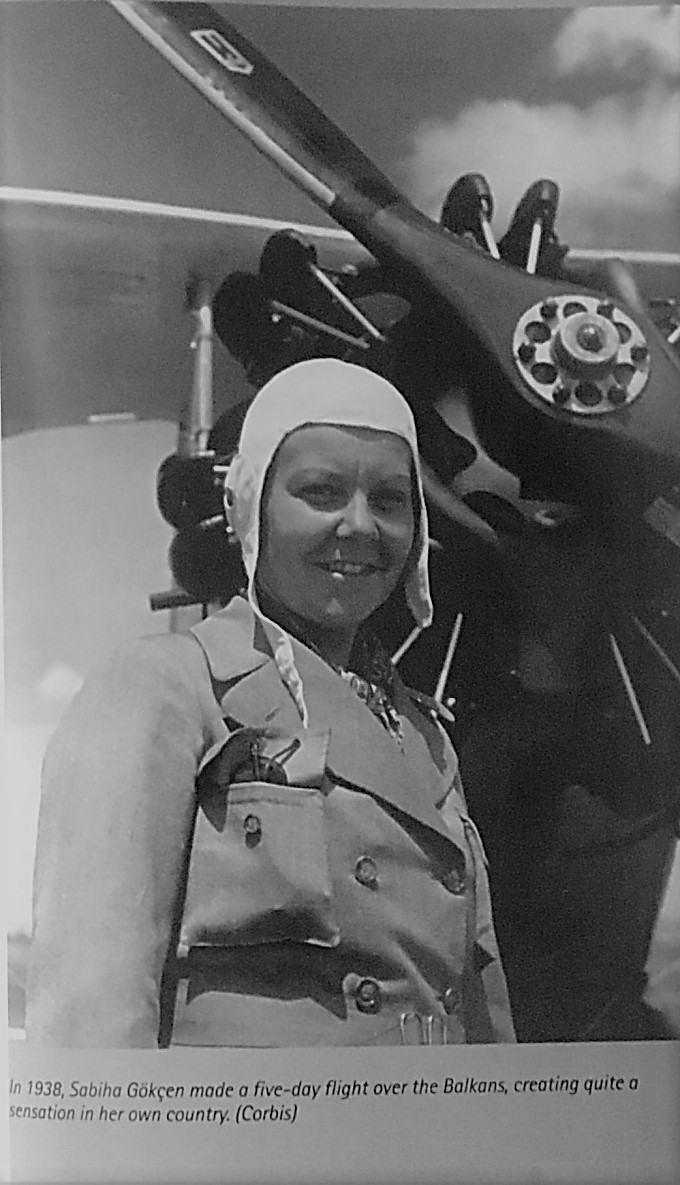 Turkey has its flying legend in the form of Sabiha Gökçen, a young woman who was “found” by Mustafa Kemal Ataturk himself, but whose origins remain obscure. Some claim she was a Turkish orphan of the Great War, others that she was an Armenian orphan. Ataturk is said to have adopted her on one of his visits to Bursa in 1922 or 1925 and brought her back to Ankara, where she studied at the Armenian school.

In 1934, Ataturk bestowed on her the surname Gokcen (she who belongs to the heavens) and, the following year, she enrolled at the civil aviation school recently set up by the Turk Hava Kurumu (THK, or Turkish Aeronautical Association). After training on gliders Sabiha was sent to the USSR to complete her training and become a gliding instructor.

The following year, she joined the military aviation school at Eskisehir, becoming the first Turkish woman to obtain a pilot’s licence and the first female pilot in the world. She remained at Eskisehir, where she flew Breguet 19s, Curtis Hawks and Vultee V-IIs and in 1937 took part in the major manoeuvres that were held in Thrace and the Aegean.

Flying her Vultee as part of the first Air Regiment, she was active in the Dersim operations against the Kurds, in one episode assisting in the taking of some forty prisoners. Subsequently appointed as head of the Turkkusu Flying School, she remained in this post until 1954. She ceased flying in 1964 but continued to teach. Throughout her career she amassed no fewer than 10,000 hours of flying at the controls of around 15 different types of aircraft.

Sabiha Gökçen (22 March 1913 – 22 March 2001) was a Turkish aviator. She was the first Turkish female combat pilot, aged 23. According to some sources, including Guinness World Records, she was also the world’s first female fighter pilot, being enrolled in the Military Aviation Academy in Eskisehir in 1936. However, others such as Marie Marvingt and Eugenie Mikhailovna Shakhovskaya preceded her as military pilots in other roles, probably without a military academy enrollment. She was one of the eight adopted children of Mustafa Kemal Atatürk.

Gökçen made headlines and sparked controversy, in 2004, when Hrant Dink, a journalist of Turkish-Armenian descent, published an interview with a person claiming to be Sabiha’s niece that claimed that she was of Armenian origin. Her adopted sister Ülkü Adatepe disputed this during an interview, claiming that Sabiha was of Bosniak ancestry.

Sabiha Gökçen’s Bosniak or Armenian origins are a matter of some dispute. According to official Turkish sources and interviews with Sabiha Gökçen, she was the daughter of Mustafa Izzet Bey and Hayriye Hanım, both of whom were of Bosniak origin. During Atatürk’s visit to Bursa in 1925, Sabiha, who was only twelve years old, asked for permission to talk with Atatürk and expressed her wish to study in a boarding school. After learning her story and about her miserable living conditions, Atatürk decided to adopt her and asked Sabiha’s brother for permission to take her to the Çankaya Presidential Residence in Ankara, where Sabiha would live among Atatürk’s other adoptive daughters, Zehra, Afet and Rukiye. Sabiha attended the Çankaya Primary School in Ankara and the Üsküdar American Academy in Istanbul.

In February 2004 an article in the newspaper Agos, headlined “The Secret of Sabiha Hatun”, contained an interview with Hripsime Sebilciyan, a former Gaziantep resident, who claimed to be Gökçen’s niece and that Gökçen herself was of Armenian ancestry. Mustafa Kemal took a liking to Sebilciyan, who was in an orphanage shortly after the Armenian Genocide, and had her adopted. According to historian Pars Tuğlacı, Gökçen herself found out about her Armenian identity while in Ankara, when members of her family contacted her from Beirut. Gökçen reportedly visited her Armenian relatives in Beirut. She had four brothers, Sarkis, Boğos, Haçik and Hovhannes.

However, along with Turkish sources and interviews with Sabiha, her adopted sister Ülkü Adatepe, also in an interview, disputed these claims of Armenian origin and reiterated that Sabiha and her both parents, Mustafa Izzet Bey and Hayriye Hanim, were of Bosniak ancestry.

Just after the introduction of the Surname Law, Atatürk gave her the family name Gökçen on 19 December 1934. ‘Gök’ means sky in Turkish and Gökçen means ‘belonging or relating to the sky’. However, she was not an aviator at that time, and it was only six months later that Sabiha developed a passion for flying. 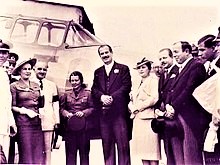 Sabiha Gökçen in Athens, during her 1938 Balkan tour.

Atatürk attached great importance to aviation and for that purpose oversaw the foundation of the Turkish Aeronautical Association in 1925. He took Sabiha along with him to the opening ceremony of Türkkuşu (Turkishbird) Flight School on 5 May 1935. During the airshow of gliders and parachutists invited from foreign countries, she got very excited. As Atatürk asked her whether she would also want to become a skydiver, she nodded “yes indeed, I am ready right now”. Atatürk instructed Fuat Bulca, the head of the school, to enroll her as the first female trainee. She was meant to become a skydiver, but she was much more interested in flying, so she received her pilot’s licence. Gökçen was sent to Russia, together with seven male students, for an advanced course in glider and powered aircraft piloting. However, when she was in Moscow, she learned the news that Zehra had died, and with collapsed morale, she immediately returned to Turkey, isolating herself from social activities for some time.

As girls were not being accepted by the War College in Turkey in those years, Sabiha Gökçen was provided, on Atatürk’s orders, with a personalized uniform, and attended a special education programme of eleven months at the Tayyare Mektebi (Aviation School) in Eskişehir in the academic year 1936-1937. After receiving her flight patents (diploma) she trained to become a war pilot at the 1st Airplane Regiment in Eskişehir for six months.

She improved her skills by flying bomber and fighter planes at the 1st Aircraft Regiment in Eskişehir Airbase and got experience after participating in the Aegean and Thrace exercises in 1937. In that same year, she took part in the Dersim rebellion and became the first Turkish female air force combat pilot. A report of the General Staff mentioned the “serious damage” that had been caused by her 50 kg bomb to a group of fifty fleeing “bandits.”and she was awarded with a takdirname (letter of appreciation). She was also awarded the Turkish Aeronautical Association’s first “Murassa (Jeweled) Medal” for her superior performance in this operation.

In 1938, she carried out a five-day flight around the Balkan countries to great acclaim. In the same year, she was appointed “chief trainer” of the Türkkuşu Flight School of the Turkish Aeronautical Association, where she served until 1954 as a flight instructor and became a member of the association’s executive board. She trained four female aviators, Edibe Subaşı, Yıldız Uçman, Sahavet Karapas and Nezihe Viranyalı. Sabiha Gökçen flew around the world for a period of 28 years until 1964. Her book entitled “A Life Along the Path of Atatürk” was published in 1981 by the Turkish Aeronautical Association to commemorate Atatürk’s 100th birthday.

Throughout her career in the Turkish Air Force, Gökçen flew 22 different types of aircraft for more than 8,000 hours, 32 hours of which were active combat and bombardment missions.

After the 2004 article “The Secret of Sabiha Hatun” said that Sabiha had an Armenian origin, many contested the matter, including the last living daughter of Atatürk, Ülkü Adatepe, who disputed the claim during an interview. According to Adatepe, Sabiha’s mother Hayriye was an ethnic Bosniak. The mere notion that Gökçen could have been Armenian caused an uproar throughout Turkey; the Turkish General Staff said the debate “mocked national values” and was “not conducive to social peace“.

Hrant Dink, the journalist who wrote the article, came under fire, most notably from newspaper columnists and Turkish ultra-nationalist groups, which labeled him a traitor. A US consul dispatch leaked by WikiLeaks and penned by an official from the consulate in Istanbul observed that the entire affair “exposed an ugly streak of racism in Turkish society.” It is also believed that the affair was one of the reasons that led to Hrant Dink’s assassination in Istanbul in January 2007, by Ogün Samast, a 17-year-old Turkish nationalist.

Bust of Sabiha Gökçen in the Istanbul Aviation Museum.