In the science of air transport, and probably in all methods of transportation, there must be an optimum unit size from an overall economic point of view. This will vary from route to route and will depend on a great number of inter-relating factors, such as demand, seat-mile cost, desirable frequency and speed. An independent factor is the state of the art at the time.
In operating some aeroplanes, some of the costs are fixed, regardless of its size, and many others increase very slowly with increased size. The result is that seat-mile costs generally decrease with increasing aeroplane capacity. For any given route therefore, there is a need to use the largest aeroplane that traffic can justify without decreasing the frequency to an unacceptable level. At the same time there has been a demand for increased fuel capacity due, in part, to the increased fuel consumption of jet engines; for short-haul aeroplanes this gives the advantages of several short sectors without the need to refuel, and for long-haul aeroplanes it gives the direct connection on long routes which traffic now justifies. Whether London-New York seemed adequate some years ago, London-Los Angeles is now required.

These two requirements of increased seating capacity and increased range have resulted in much larger aeroplanes; and larger aeroplanes are of course heavier aeroplanes.
The reason for aircraft having jet engines is simply that only the jet engine can produce the qualities required to satisfy the demands made by the modern transport aeroplane.
It is worth examining briefly the requirements of modern transport aeroplane in relation to speed and size. The economic benefits of speed are twofold; utilization and passenger appeal. If the flight speed is doubled, in theory only half the number of aeroplanes are required to perform a given task, with a consequent saving in capital expenditure and total running costs, even though the running cost of each aeroplane may be higher. Short journey times will attract passengers, thus giving higher load factors to the faster aeroplane. This effect is especially pronounced in a fare structure that contains no speed differential.

It is therefore clear that transport aircraft should fly at the highest subsonic speed possible before compressibility drag rise becomes excessive (Mach 0.8 to 0.9), or at a supersonic speed sufficiently high for the economic advantages of speed to offset the supersonic drag penalties. (Mach 2.0 and above).

It is clearly cheaper to use one large aeroplane than two small ones to carry a given number of passengers at the same time. As the potential traffic on any particular route grows so will the optimum size of aeroplane for that route increase. Thus there will always be a tendency for aircraft to become larger until the full traffic potential is realized. This makes the case for large, fast aeroplanes.

The engine qualities for a large fast aeroplane can best be highlighted by identifying the more important of the particular qualities required and comparing the piston engine with the jet engine in each case.

High output per single unit: because of the optimum number of power units required for a given task, the piston engine again failed to produce the high power required in a single unit, whereas the jet engine succeeds.

the jet’s propulsive (Froude) efficiency rises as cruising speed increases, particularly as bypass ratios increase; its ‘conversion’ efficiency remains substantially constant over a wide speed range, unlike propeller efficiency which falls off rapidly due to compressibility trouble above about Mach 0.5. Therefore its overall efficiency is greater than that of a piston engine.

Efficient cooling: the jet engine, in terms of drag and fuel consumed, is less expensive to cool than was the piston engine.

To summarize we can say that the piston engine and the propeller have been rendered obsolete by the increase in size and operating speed of modern transport aircraft. Only a turbine engine can meet all the requirements in the critical parameters discussed above.

Faster: within reason, it is not too difficult to design any vehicle to accomplish its primary task, whether it is a submarine, a large earth mover or a vehicle for crawling across the surface of the moon. The degree of difficulty will depend on just what the primary task is in relation to the state of the art and material capability at the time. In the case of air travel that task is to travel quickly. Apart from the natural evolution of air transport producing higher speeds (this is common to all forms of passenger transport) increased speed of travel can be defended on two grounds:
• The sociological one of travelling time being unproductive, possibly boring and merely a hindrance to the early completion of the task at the destination
• The economic one of production capability against time; for more or less fixed overheads the faster the aeroplane the greater it’s productive capacity in any time period.

The need for greater speed having been established the remainder of the explanation lies in the technical field. A simple graph of cruising speed against time shows steady progression over the years except for two significant hesitations in the upward trend.

The first came as a result of propulsion rather than airframe limitations. The necessary increases in engine power became more difficult to obtain; the jet engine removed this problem although it had to do it in two stages – firstly the small increase provided by the prop-jet, and secondly the larger increase provided by the pure jet.
The second hesitation which is still with us, comes mainly as a result of the airframe problems in adapting the jet engine to supersonic flight, it will remain an efficient source of power in this regime. The needs to fly fast and high are very closely related.

Higher: the primary reason for operating a jet transport at high altitudes is to make coincident the best operating condition of the engine with the best operating condition of the airframe. On the airframe side this is because total drag varies with speed in the manner shown in Figure 2.3. Induced drag decreasing with speed and profile drag increasing with speed produce a characteristic curve with a minimum value somewhat around 1.4 Vs. This minimum drag speed is used only for maximum endurance, for example when holding; for maximum range the optimum speed is classically 1.3 Vimd.

The optimum speed for maximum range varies with altitude; it is somewhat higher at low altitudes and lower at high altitudes. If the lower speeds are used, however, greater care is necessary to avoid the consequences of reducing speed stability, and possibly reducing oscillatory stability which will more than negate the advantage gained from reduced speed. Since drag in terms of speed varies with EAS and since TAS in relation to EAS increases with altitude, it follows that the higher the altitude the higher the TAS for a given EAS and drag (and in fact the higher the TAS even for a reducing EAS, within reason). Hence more miles are covered for the fuel expenditure necessary to produce the thrust to equal the drag.

On the engine side it can be said that for best SFC, the engine needs to be operated at its design optimum conditions, which in very broad terms, is around say 90% rpm. Since for a given rpm, thrust falls with altitude (the jet engine being ‘unsupercharged’), it follows that only at high altitude will the thrust be low enough to equal the the required thrust at normal cruising rpm.

Now we have coincidence of the engine operating at its optimum condition (and producing just the required amount of thrust to equal the drag of the airframe at its reasonable minimum) at an EAS giving a high TAS. Thus there is need to fly high.

It scarcely needs saying that, having designed an airframe and engines to be at their best at certain flight conditions, then some deterioration must be accepted for significant departures from the optimum; but it is perhaps worth detailing the reasons for not operating at other points in the speed/altitude envelope.

At low altitude and low speed, SFC will rise markedly because of the poor performance of the jet engine under throttled conditions. Any attempt to run the engine efficiently at high rpm will produce so much thrust that the resulting speed will incur high drag penalties and quite easily exceed the maximum speed.

Referring once again to figure 2.3 and considering the engine thrust against altitude curve, it can be seen that at low altitudes engine thrust decreases with speed because of the increasing engine internal drag with increasing aircraft speed. At higher altitudes, there is a restoration of this loss with increased speed due to the ram effect at higher Mach numbers. In figure 2.6 the speed versus altitude curve has a ‘Best Speed’ altitude band; the specific range versus altitude curve (Figure 2.4) has a ‘Best Economy’ altitude band. These show that for best cruise cruise speed relatively low cruise altitudes are required and that for best range relatively high cruise altitudes are required. 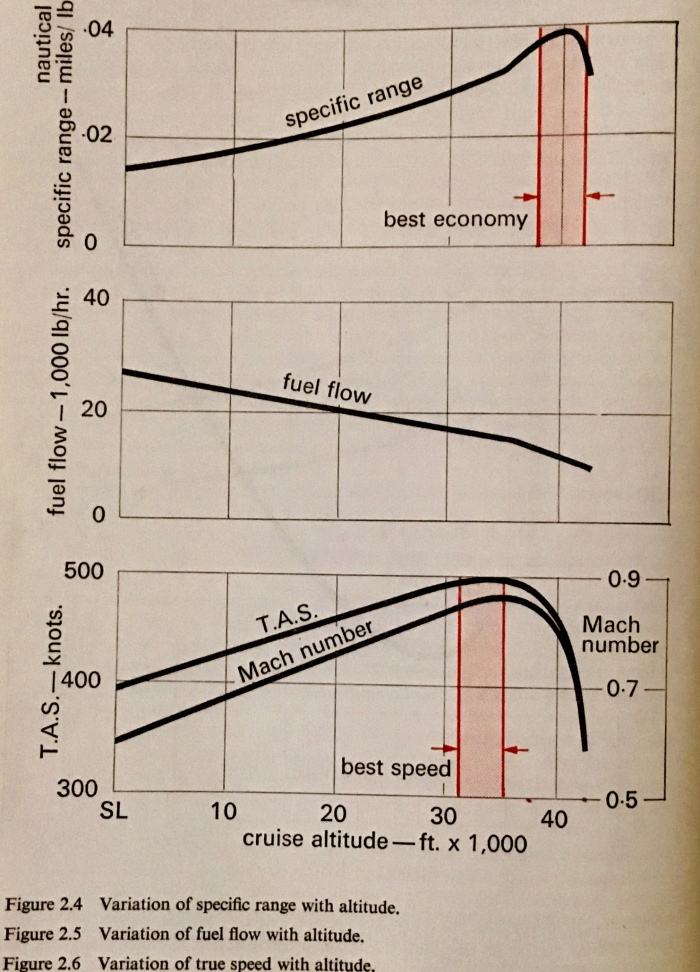