You’re 25 times more likely to suffer a controlled flight into terrain (CFIT) crash if you’re flying a circling approach rather than a straight-in procedure, according to accident statistics compiled by the Flight Safety Foundation. As such, IFR circling approaches are among the highest risk manoeuvres attempted by pilots.

The FAA’s Aeronautical Information Manual (AIM) advises pilots to remain at or above the circling altitude until the aircraft is continuously in a position from which a descent to a landing on the intended runway can be made at a normal rate of descent using normal manoeuvres. Some operators require their pilots to remain at the published circling minimum descent altitude until they’re within a +/-30-degree sector of the extended centreline of the landing runway. That’s because a straight-in minima only can be published if the final approach course is within that sector. Otherwise circling minima apply.

ICAO Procedures for Air Navigation Services (PAN-Ops) are used to design European and most international instrument approach procedures. PAN-Ops circle to land minima assume considerably higher circling speeds, larger turning radii, longer final approach straight-in distances and higher obstacle clearances than the old Terminal Instrument Procedures (TERPS). In short, they provide considerably wider safety margins than legacy TERPS circling procedures. PAN-Ops also provide higher visibility requirements and obstacle clearance margins than TERPS. And it provides a defined straight-leg segment to the landing runway that helps pilots stabilize the approach to the landing runway. That’s why several pilots who fly international air carriers stated that their companies permit them to fly circling approaches in most aircraft. The ops specs for many international air carriers, for instance, permit circling approaches in all aircraft except for the B747 and Airbus 380.

Military airports are more apt to use TERPS than PANS-Ops procedures because they generally provide lower weather minima, enabling pilots to land at such facilities in weather conditions that could be too risky for civilian pilots. TERPS safety margins demand strict adherence to SOPS. Any deviation increases the risk of loss of control or CFIT. PANS-Ops, in contrast, provide fatter circling margins that are better suited to large civilian jetliner operations. Circling procedures designed in accordance with the TERPS Change 21 are identified by a black diamond with a white on Jeppesen approach charts and a black square with a white on NACO charts.

5 An aircraft on, or going around from, a circling approach has a mid-air collision with another aircraft

6 A circling aircraft confuses the intended runway and lands on another occupied, runway, which results in a collision on the ground.

Mitigating the risks associated with flying circling approaches starts with a thorough briefing by the flight crew prior to departure, even if there is only a small probability that forecasts winds will require circling to land. The pre-flight briefing for a circling approach should include a review of the aircraft’s speed category, the protected circling approach area radii. The regulatory basis for the approach can be determined by either a TERPS or PANS-Ops label in the side margin of the chart.

Using precise timing for each leg can help keep the aircraft inside the protected airspace. If you’re crossing directly overhead the landing runway at 90 degrees angle, then you might want to time 15 sec before you turn 90 degree to downwind. For 45 degree off-set turns, recommended timing is 30 sec prior to turning back 45 degree to downwind. Once reaching abeam the landing runway threshold, many operators choose to fly no more than 15 to 20 sec prior to starting the turn to base leg. If it’s a PANS-Ops approach, start the descent and turn to final in time to stabilize the approach to the landing runway but only with the runway threshold in sight.

Many flight departments assign pilot-flying duties to the person sitting on the side of the aircraft with the best view of the runway. The pilot-flying’s most critical tasks are keeping the runway environment in sight, maintaining control of the aircraft and navigating the aircraft to remain inside the protected airspace. Because of the risk of inadvertently exceeding the limits of the aircraft’s manoeuvring flight envelope and losing control, some training service firms, aircraft manufacturers and corporate operators recommend coupling the autopilot and using the heading and altitude hold modes to fly most of the circling manoeuvre. Using the autopilot assures that the aircraft won’t exceed normal bank angles or dip below published circling minimum descent altitude until it’s disconnected to intersect final approach. Even if an operator allows pilots to fly down to published circling minimum descent altitude, it’s good practice to maintain normal VFR traffic pattern altitude if weather conditions permit. It’s a lot safer to circle at 1,000 feet AGL than at 350-to-450 feet-MDAs.

Some flight departments bump up the minima for their aircraft by using higher speed aircraft categories for circling. If the pilots are flying a Category C aircraft with a final speed of 121 to 140 KIAS, the operator might require crews to use Category D minima for circling to provide more room to manoeuvre, thereby providing additional safety margins. TERPS visibility requirements, as well as for turning radii, for circling approaches also are tight. Visibility minima only are 1 to 2 mile, so it’s imperative to keep the runway in sight at all times, while maneuvering. Snow flurries, a rain shaft, fog bank or ragged ceiling instantly can cause you to lose sight of the airport. If that occurs, you’re compelled to turn toward the landing runway and execute the published missed approach.

The AIM recognizes the challenges of safely flying circling manoeuvres, noting that they’re flown at low altitude, at low airspeed and in marginal flight conditions. Such manoeuvres test piloting skills, judgment and aircraft performance knowledge. Since the point at which the pilot may start descending for the runway isn’t well defined, most old school instructors advise pilots not to descend from circling altitude until they’re within 30 degree of the landing runway centreline. But remaining so long at circling altitude in low visibility conditions may result in a plunging descent very close to the runway end. That may prevent flying a stabilized approach, increasing the risk of approaching at too high a speed, landing long and running off the runway.

Experienced pilots have a healthy respect for the hazards associated with circling approaches. Flying a circling manoeuvre in a simulator usually is far different from real world conditions, note two Delta Air Lines captains. These approaches have always been more difficult and accident prone… The sim is a poor trainer and can’t replicate the ragged clouds and changing visibility around the airport very well, says one veteran pilot. He says Delta’s ops specs required weather minima of 1,000 feet AGL, or 1,000 feet above published minima for an extra measure of safety. Pilots are tempted to push low Visibility or IMC to get in. (Circling) is a VMC manoeuvre or go-around. We need 1,000 and 3 to circle in the big birds, says the other four-striper. Many flight departments also use 1,000 feet ceiling and 3 mile visibility for circling weather minima. And many just plain prohibit circling manoeuvres at night.

Doubtlessly, RNP procedures, using GPS, eventually will eliminate the need for circling approaches because they don’t rely on ground-based navaids. So they can provide guidance to every runway end at every airport. But until that happens, pilots will have to be on their A game when flying circling approaches.

Below: Air Blue Flight ABQ-202 A-321,Reg. AP-BJB, Pakistan crashed on 28 July 2010 at Margalla Hills, Islamabad, while carrying out a circling approach. The captain  after carrying out an ILS procedure for runway 30, flew the aircraft from the circling minima altitude in an attempted circling approach manoeuvre for the opposite end of the runway, 12,  on autopilot on pre-determined electronic waypoints from his FMS; went below the safety altitude minima, strayed from the safety zone established for the procedure and lost sight of runway 12. The aircraft crashed on the northwest corner of the chart. 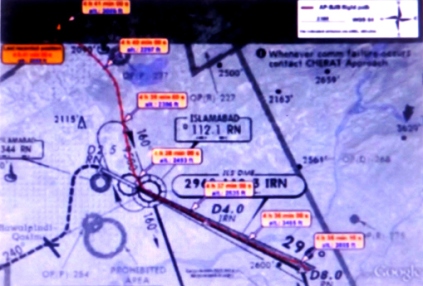