With the launch of the Jet Age with its 707-100 series, Boeing soon found itself at a competitive disadvantage with Douglas, who already had an established world-wide network of agents, representatives and salesmen to market its DC-8 jet. To counter this, according to Ron Davies in Pan Am-An Airline and Its Aircraft, Boeing produced what it called

“a family of airliners, focusing on the commonality of parts between the various models”.

“although this did not look like a family until the Boeing 727 was launched in 1963, the idea was nevertheless effective, even though the 707s seemed to look the same”.

According to Davies, Boeing

“made much of its willingness to meet a customer’s precise requirements, whereas Douglas was inclined to be more rigid, offering a choice of DC-8 series but reluctant to deviate from the basic specifications of each series.”

While the 707-100 series was being introduced and the long-range 707-300 series was being planned, Boeing also decided to develop a 707 derivative with increased performance for short-to-medium range routes, allowing the plane to operate from shorter runways. Initially the plane was identified as the 707-020, was later changed to 717-020 and, with input from launch customer United Airlines, was eventually designated the 720.

Outwardly the model 720 resembled the 707, but it was a very different airplane. It had a much lighter structure and was 9 feet (2.74 meters) shorter than the 707-100. It also had an increased wing sweep on the leading edge between the fuselage and inboard engines as well as full-span Krueger leading edge flaps. The 720 carried less fuel than the 707-100. Combined with its lighter structure, this gave the plane a lower gross weight, increased takeoff performance and a higher top speed.

The 720 went into service on 5 July 1960 with United Airlines. Boeing built 65 model 720s. The only variant of the 720 was the 720B which first flew on 6 October 1960.  The main difference on the 720B was the installation of Pratt and Whitney JT3D Turbofan engines that increased the takeoff and climb performance as well as cruise speed of the plane. These engines also increased the range to 4000 miles, which, for a short time, was the longest range for any commercial airliner. Boeing built a total of 89 720Bs.

Pan American operated nine 720Bs, delivered between 1963 and 1965. They were mainly used in the Caribbean and Latin America and were eventually disposed of by 1974.

The 720 proved to be an economical plane to operate and was a favorite of pilots, passengers and operators alike. However, the rapid pace of technology soon caught up with it as the more capable 727 replaced the 720 as the leader in the medium-range, high-performance market.

Courtesy: Ron Davies in Pan Am – An Airline and Its Aircraft 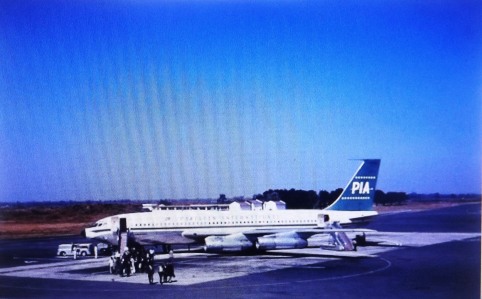 AP-AMH met with an accident at Cairo on PIA’s inaugural flight to London on May 19, 1965. 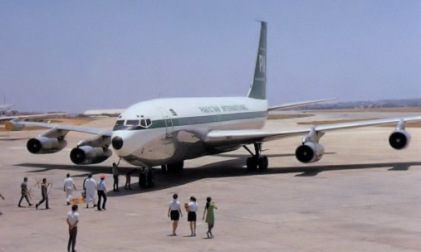 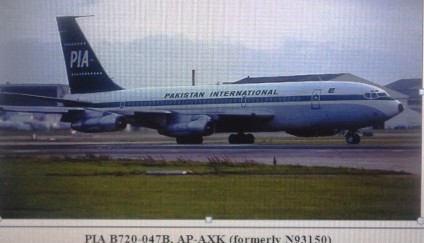 The featured image of this blog was the aircraft  with me to Colombo, Sri Lanka and back , which is described in: smhusain1.com, in “An Unwelcome Decision.”

AP-AMJ (B720) still holds the world speed record established in 1961 between London (LHR) and Karachi (KHI) of 6 hours and 53 minutes. The aircraft was flown by Captain Abdullah Baig and Captain Taimur Baig with Flight Engineer Khan. The aircraft carried a FAI representative on board.