The three views illustrate the MiG-19S. The centre side view shows the MiG-19PF and the bottom view the MiG-19PM

Built in large numbers than any other version of the MiG-19 and now the only model still serving in substantial numbers, the MiG-19SF has a secondary ground attack role and (apart from the Chinese-built version) is now largely confined to the V-VS FA and the air forces of Cuba and Egypt.

The first Soviet production fighter capable of attaining supersonic speed in level flight and a contemporary of the North American F-100 Super Sabre, the MiG-19 is no longer included in the first-line inventory of the Warsaw Pact air forces (apart from one squadron of MiG-19PMs that remained with the Polskie Wojska Loticze late in 1974), but remains in service in some numbers with the air forces of Cuba and Egypt, while a copy of the basic dual-role clear weather model, the MiG-19S, produced by the Chinese People’s Republic as the F-6, has been supplied to Albania, North Vietnam and Pakistan, and is currently one of the principal combat aircraft of the Sino-Communist air arm.

The MiG-19 was designed to meet a requirement calling for a clear-weather single-seat interceptor capable of supersonic speed in level flight and possessing secondary ground attack capability, and the first prototype was flown in 1953, deliveries of the initial production model to the V-VS commencing early in 1955. Of relatively simple concept, the MiG-19 was powered by two small diameter Mikulin AM-5 axial-flow turbojets mounted side-by-side in the rear fuselage and each offering a maximum dry thrust of 4,850lb (2,200 kg) which was boosted by reheat to 6,700lb (3,040 kg). The three-spar wing swept55 degrees on the leading edge carried large-area Fowler-type flaps which had a combat manoeuvre setting for use up to 495 mph (797 km/h) IAS: four fuselage fuel cells had a total capacity of 477 Imp gal (2170 litres) and could be supplemented by two 176 Imp gal (800 litres) underwing drop tanks, and armament comprised one 37-mm NR 37 in the starboard side of the forward fuselage and a 23-mm NR 23 in each wing.

At an early stage in the production life of the fighter, control problems primarily related to elevator ineffectiveness, resulted in the replacement of the conventional elevators by a slab- type tail plane, the designation being changed to MiG-19S, the suffix letter indicating Stabilizator. Various modifications dictated by early service usage included the addition o spoilers to boost the ailerons and the provision of a ventral air brake to supplement the two lateral air brakes. Increased attention was given to flight safety, the hydraulic system being fully duplicated, automatic stick-to-tailplane gearing to give a near-constant rate of stick force per g was provided by means of an electro-mechanical linkage and an electric system was provided to operate the slab-tail for pitch control in the event of a hydraulic failure. All control runs were rerouted, those between the cockpit and the tail being inserted in a ‘tunnel’ which formed a dorsal spine and armament was changed to three 30-mm NR-30 cannon.

The MiG-19S began to appear in service in substantial numbers in the latter half of 1956, and for the secondary ground attack role two weapon stations were introduced  beneath the wing aft and slightly inboard of the main undercarriage attachment points, these each carrying such loads as a UV-8-57 pod containing eight 55-mm S-5 rockets, a 551-lb(250 kg) bomb, or a 190-mm TRS or 212-mm ARS-212 rocket. Further developments resulted in 1957, in the service appearance of the MiG-19SF, the additional suffix letter indicating forsirovanny or Forsazh-literally ‘boosted’-and signifying the replacement of the Mikulin engines by Tumansky RD-9Bs each offering a maximum dry thrust of 5,732 lb (2600kg) boosted to 7,165 lb (3,250kg) with reheat and offering a very good thrust-to weight ratio. In service the ‘F’ suffix letter was usually discarded, the air raft being simply known as the MiG-19S. A small number of examples of the MiG-19SF were supplied to China prior to 1969, when ideological differences between the two countries resulted in the severance of relations, and both the MiG-19S airframe and its RD-9B-811 turbojet were subsequently manufactured in China without benefit of a licence agreement.

Although designed as a clear-weather fighter with a gyro gunsight and no radar ranging, some limited all-weather capability was given to the aircraft by the installation of the so-called Scan Odd radar, a dual-PRF (Pulse Repetition Frequency) X-band set for search and intercept with the  conical scan dish  housed in a central cone carried by the intake splitter and the range measurement antenna being incorporated in an enlarged intake upper lip. This variant was designated MiG-19PF, the first suffix letter indicating Perekhvatchik, which, by this time was a term being used in the al-weather intercept connotation. One further version of the fighter was to appear before the MiG-19 was phased out of production in the early ‘sixties’, this, the MiG-19PM (Perekhvatchik Modifikatsirovanny), being the second V-VS service fighter to discard gun armament in favour of AAMs. The MiG-19PM was equipped with four first generation AA-3 Alkali radar homing missiles carried by pylons projections forward of the wing leading edge.

The MiG-19SF is numerically the most important fighter in the inventory of the Pakistan Air Force which has been supplied with this type by China, others being supplied to Albania and North Vietnam

The MiG-19PM above and below was the second V-VS fighter to discard cannon in favour of an all missile armament and normally carried a quartet of first generation AA-3 Alkali radar homing missiles. Limited all-weather capability was provided by X-band Scan Odd radar with range measurement antenna in an enlarged intake upper lip and a conical scan dish in a central cone on the intake splitter.

Although the MiG-19 had a comparatively short life in Soviet service, the Chinese came to value its agility, turning performance, and powerful cannon armament, and produced it for their own use between 1958 and 1981. While the basic Soviet-designed MiG-19 has been retired from all nations, the Shenyang J-6 still flies for nine of its original 15 operators, however, in a very limited capacity. The J-6 airframe contributed to the Chinese ground attack version, the Q-5, which still flies for numerous nations.
The J-6 was considered “disposable” and was intended to be operated for only 100 flight hours (or approximately 100 sorties) before being overhauled. The Pakistan Air Force was often able to extend this to 130 hours with diligent maintenance.

Albania: Albanian Air Force J-6s replaced the J-5s on the border to intercept Yugoslav incursions into Albanian airspace. However, the J-6 was ineffective against the faster Yugoslav MiG-21 ‘Fishbed’. Once the F-7A became available, the J-6 was redeployed to guard Tirana. As of 2005 all Albanian fighters were grounded due to lack of spare parts.

The F-6 was flown by the Pakistan Air Force from 1965 to 2002, the aircraft design undergoing around 140 modifications to improve its capabilities in the interceptor and close air support roles. The PAF F-6 fighters participated in the Indo-Pak War 1971 against India, scoring approximately 6 confirmed aerial victories including one Indian MiG-21. The three Pakistani J-6 squadrons flew nearly a thousand sorties, during which the PAF lost 3-4 F-6 to ground fire and two to three in aerial combat. An F-6 was also lost to friendly fire. One of the F-6 pilots shot down was Wajid Ali Khan, who was taken as a POW and later became a Member of Parliament in Canada. The single seat F-6 was retired from the Pakistani Air Force in 2002, but the two-seat trainer, the FT-6, remains in service in very small numbers.

Vietnam War
The supersonic speed advantage provided by the MiG-21’s more modern turbojet engine was found to be not as useful in combat as originally thought, because aerial dogfights at the time were conducted almost entirely in the sub-sonic speed regime. The J-6 (and hence the MiG-19 also) was found to be more manoeuvrable than the MiG-21 and, although slower, its acceleration during dogfights was considered adequate. The North Vietnamese Air Force fielded at least one unit of J-6 during the war, the 925th Fighter Regiment, beginning in 1969.

Ogaden War: Somalian J-6s participated in the 1977-1978 Ogaden War and suffered greatly because of the superior opposition faced (Cuban pilots fought for Ethiopia). Over 75% of the Somali Air Force was destroyed in the war but some J-6s survived until the country turned into turmoil in the early 1990s.

In the era of Khmer Rouge control of Cambodia (1975-1979), Chinese-supplied Khmer J-6s participated in Kampuchea-Vietnamese border clashes for ground attacks. During the Vietnamese invasion in 1978, the Cambodian aircraft were reluctant to take-off to intercept the Vietnamese ones, thus the Vietnamese captured a number of J-6s and put them on public display.

Shenyang J-6A – (a.k.a. Type 59A, Dongfeng-103, Jianjiji-6 Jia) – Early production from 1958 to 1960 was sub-standard and not accepted by the PLAAF. Production was halted, the jigs scrapped, and production restarted with assistance from the USSR. The J-6A was equivalent to the MiG-19P but not identical. The maiden flight was made by Wang Youhuai on 17 December 1958. The total production figure for this variant was only one hundred or so. It was reported that J-6A, along with J-8B, never actually passed PLAAF’s test. The planes suffered from quality issues, flight characteristics were much lower than J-6, and were of little operational value.

Shenyang J-6A – Production of the J-6 restarted after new assembly jigs, and other assistance, acquired from the USSR. Similar to MiG-19PF, an all-weather radar-equipped interceptor with two NR-30 30mm cannon. Exported as the F-6A.

J-6C – (a.k.a. Jianjiji-6 Bing, Product 55 and F-6C) Day fighter version with three 30mm cannon and braking parachute at the base of the rudder.[1] This cannon’s code name is Type 30-1. Firing at 850 rounds per minute, it is effective against large aircraft with its armor-piercing and high-explosive ammunitions.

Shenyang J-6III – Advanced version of the J-6A with radome on the splitter plate (rather than the shock cone centerbody) for a Chinese-made radar. May also have been designated J-6 Xin.

Shenyang JZ-6 – (Jianjiji Zhenchaji – reconnaissance fighter) Dedicated reconnaissance version with fuselage camera pack replacing cannon. As of April 2006, it was reported that the PLAAF 3rd Recon Regiment, 26 Air Division based in Nanjing MR, is the last regiment to actively fly the JZ-6 refusing to convert to JZ-8F. Exported as the Shenyang FR-6.

Operators: There are currently two active operators of the Shenyang J-6 out of fifteen total users in its history. 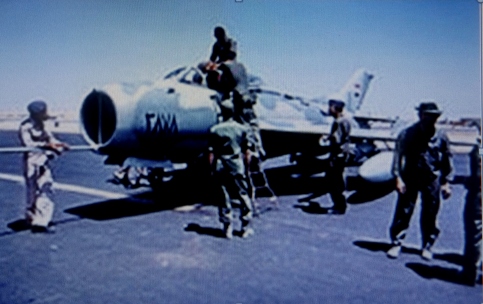 The nose of an F-6, showing the 30 mm cannons fitted in the right wing root and the lower body.