The following is a record of the Fokker F-27 Friendship aircraft’s  service in Pakistan International Airlines. It was the initial equipment for me after graduating with a commercial pilot licence, and I stayed on it from September 15, 1969 to April 18, 1976. A list of F-27s I flew as in charge ‘P1’ or copilot ‘P2’ is given below.  In compiling this record, I was struck by the number of accidents, but one must keep in mind the time span which was about 46 years. The major factor in nearly 90% or more of the accidents was pilot error or as we label it nowadays, human factors.

This reliable aircraft replaced the DC3 ‘Dakota’ in servicing the Northern Areas of Pakistan. It was the only mode of communication to places like Gilgit, Skardu and Chitral in winter because the road access was very slow and usually blocked by landslides or snow.The captains had to undergo rigorous route checks to be cleared to fly in the mountains but some took chances and the penalty had to be paid with always 100% fatalities. AP-BBF disappeared in August 25, 1989 while returning from Gilgit and has never been found. The DC 3 took the Indus river  route because it was limited by a non-pressurized cabin while the F-27 flew direct when possible weather permitting at altitudes above sea level of 17500 and 18500 feet on return.

AP-ALM operating as a night coach (Pk 625) crashed near Rawat about 25 miles from Rawalpindi on August 6, 1970. The aircraft got airborne at 0222 local time, straight into the path of a thunderstorm, and crashed minutes later while the captain tried to turn back, a fatal mistake.  The downdrafts from the active storm drove the aircraft into the ground. Captain Anwarullah did not have  enough experience in airline service though he had considerable cross country time on smaller aircraft such as the Cessna 172. He was not a Rawalpindi based captain, but temporarily here due a shortage. First Officer Farid Nawaz was completing his under supervision hours and was due for command. He was a confident pilot, while First Officer Javaid Talat Qureshi was a newcomer like me, a rookie.

My last flight on this aircraft was on August 5, a day earlier, as P2 on sector LHE-RWP-GIL-RWP with Captain Amin Akhtar. Earlier on  the same day,  we had operated sector RWP-LHE, the same night coach on AP-ALW. The captain had delayed the return flight, Pk 624 at LHE for an hour due weather. He had a reputation amongst us of never delaying a flight, and was known as ‘captain on skd’.

AP-ALX crashed on December 12, 1971  with Capt.Mubashir Ahmed and First Officer  Khalid Javed as the cockpit crew. They were assisting Pakistan Navy in  the war effort, and went down near the Iranian border on the Makran coast. My last flight on this aircraft as P2 was on June 18, 1971 on sector KHI-HDD-MUX-LYP-LHE

AP-AUS crashed at the Sazin Bend while returning from Gilgit and following the Indus Valley on December 8, 1972. Capt Javaidullah with First Officer Javed Inayat was the cockpit crew. They tried to turn back but the speed was high for the turn in the narrow valley. The valley is followed when the direct route is not accessible due weather. Pk 631 departed Gilgit at 1140 for Rawalpindi. The aircraft crashed into a snow covered mountain, 9,000 feet high above the village Maidan, around 8 miles south of Jalkot. There were 31 on board and nobody survived. My last flight on this aircraft as P2 was on Sept. 1, 1972 on sector KHI-LHE-KHI

AP-AUW was written off on December 23, 1972 while operating as a  passenger flight on sector KHI-MUX-LYP-LHE, with cockpit crew below:

There were 42 on board and there were 6 fatalities among the passengers. On final approach at night at Lyallpur, the aircraft undershot the runway, crashing after striking trees half a mile from the runway threshold.The captain was not sitting on the controls. This was a dark hole approach. The only radio aid, a NDB which is useless in any weather. The landscape is flat and devoid of any illumination if there is no moon; if the visibility was good the runway could be spotted from far but there was no means to gauge the distance other than the eyes. Last flown this aircraft on February 7, 1973 as P2 on sector KHI-MUX-LYP-LHE-RWP.

Note: NDB is a radio beacon whose signal is disturbed by any kind of static

AP-ATO: written off on March 16, 1977 during test flight.Captain Feroze Khan

The aircraft took off from Karachi Airport at 0735 for a test flight. Both engines lost power immediately following a power increase during a stall recovery. The aircraft crashed near Central Ordnance Depot (COD) area, Karachi, around 0810. The F-27 was engaged in a series of stall tests.

Probable cause: “Overheating of both engines, resulting in their simultaneous failure. This was caused by malfunction of the contact switches of no.1 engine propeller automatic safety pitch locks withdrawal system and pilot’s failure to withdraw the locks manually by placing the HP fuel cock levers into the ‘lockout’ position”.

Crew 3, no fatalities. During training flight, the aircraft  overran the runway after aborting take-off at 90 knots during a touch-and-go at Gilgit. My last flight on X-ray Foxtrot was on March 11, 1976 as P1 on sector RWP-LHE-RWP

The aircraft undershot runway 35 during a night approach, impacted the edge of a ditch, broke up and eventually came to rest inverted. The co-pilot, who was under route check, let the aircraft descend below MDA of 400 ft in an attempt to locate the runway visually. The pilot was distracted from monitoring the height because he was attempting to talk to the co-pilot in correcting the approach. 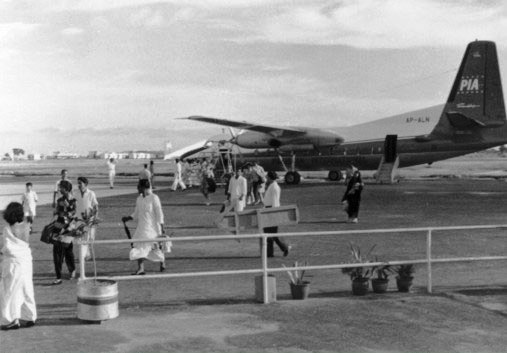 The flight crew was faced with no.1 engine problem on final approach. The approach was continued, but poor alignment with the runway forced the crew to go-around. The no.2 engine was set at full power and gear and flaps were retracted, but the aircraft continued to lose height. A turn was made to avoid the Indus River and the F27 touched down in a paddy field. The aircraft slid for 300 metres before colliding with a tree.; my last flight on Lima November was 14/3/1976 as P1 on sector RWP-LHE-RWP-LHE-RWP 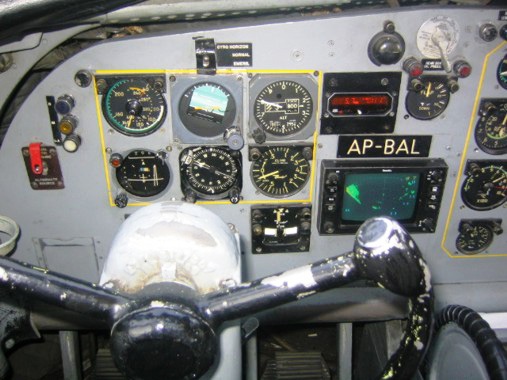 The F-27, a medium-range turbo-prop transport first flew on Nov 24, 1955 and went into service in 1958. It was produced by Fokker in Holland and Fairchild in the US. A familiar sight on airline routes around the world for thirty years; it was conceived initially as a possible replacement for the venerable Douglas DC-3 and was purchased by 168 customers in 63 countries. Production ended in 1986 and during its era, more aircraft types was manufactured than any other European airline. This high-wing aircraft was noisy and was said to shake like a cement mixer, but it provided affordable and efficient service and despite early reservations about its safety, the F27 has proved to be one of the safest aircraft in its class.

By courtesy: photos and some data  from history of PIA.com