Pakistan International Airlines Corporation (PIA), the flag carrier of Pakistan, was formed on May 25, 1954. The Lockheed Super Constellation (L-1049C),  a four engine propeller driven flying machine, was acquired as the initial equipment, three in number, and the airline flew its first service on June 7, 1954 on sector Karachi to Dacca. This was followed by the first overseas service on February 1, 1955 from Karachi to London via Cairo.

*Pakistan civil aircraft are registered with the AP as its starting designator. The Super Constellation, affectionately called the ‘Connie” had turbocharged engines, an improvement on the piston engine. The exhaust gases of the engine were reused in the engine for better performance at altitude but were  prone to numerous malfunctions as a result.

PIA formally took over Orient Airway in March 1955. The consolidation enabled expansion of services on the domestic network with the acquired Douglas DC-3 and Convair CV-240 aircraft, eleven and two respectively. Super Constellations were thus for overseas services. 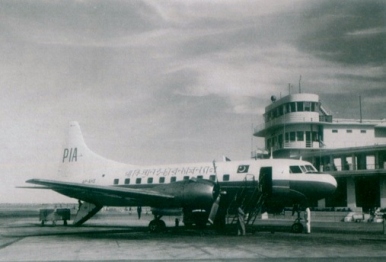 Propeller Jets: fleet modernization was accomplished by ordering in May 1956, three Vickers Viscount 815 aircraft, a four engine turboprop aircraft. Additions in the fleet were made in 1961 with the Fokker F-27 Friendship, a twin engine turboprop aircraft*, which was received on January 3, 1961. The DC-3 aircraft were set free for the  remote areas of East Pakistan.

*Turbo-propeller means an aircraft whose engines are driven by turbine power driving in turn a propeller, instead of the conventional pistons in the cylinder moving the propeller. Roughly for the layman a jet engine with a propeller.

Jets  1960: As the first Asian airline with a jet service using a leased Boeing 707-121 airplane from Pan American World Airways in March 1960, PIA started its London service which was extended to New York in June 1961.

Passengers are seen boarding a B 707 leased from Pan Am (N723PA)  at Heathrow Airport, London

The arrival of the first flight from Shanghai at Dacca Airport, East Pakistan.

B720, AP-ATQ on arrival at Karachi on delivery

In December 1961, the airline received its jet aircraft, three Boeing 720-040Bs. The service to New York City was discontinued in 1963 but was resumed in 1972. On April 29, 1964, PIA was the first airline of a non-communist country to operate service to Shanghai in the People’s Republic of China. 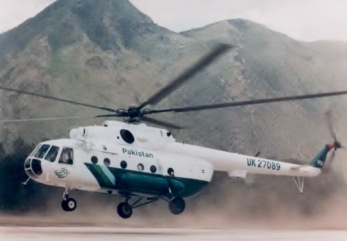 Sikorski S 61N helicopter service was introduced  in East Pakistan. The airline also ordered four Trident aircraft (1E) from Hawker Siddely to replace the Vickers Viscounts 815. Twin Otters were put into operation in East Pakistan in the spring/summer of 1971. This aircraft, the de-Havilland Twin Otter (DHC-6) from Canada,  is essentially a short field performance aircraft and was well suited for the area of its operation.

*Turbofan means an improved jet engine with a better bypass ratio of cooling air flowing outside the engine versus air going into the compressor and onward to the turbines.

AP-BAK and AP-BAT were new 747 airplanes received from the Boeing Company. The navigation was self-contained through three inertial navigation systems and an advanced auto-throttle system using GE engines permitting an all regime flight including take offs and of course auto landings. 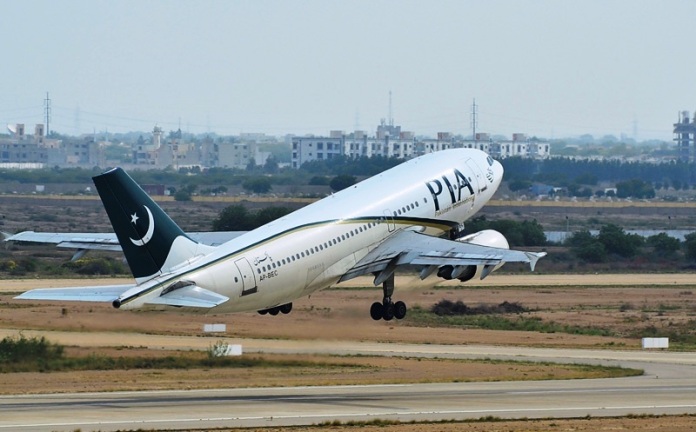 Induction of Boeing 777-200/300; Turboprop ATR-42; Airbus A-320: Life has been tough for PIA, and a fight for survival in the competitive world of commercial aviation. As Pakistan’s flag standard bearer, it had to set standards high and maintain them. It is a worthy ambassador of the country and its services and personnel have helped to make Pakistan widely know in a large part of the world. It has also acquitted itself well on the safety score with an enviable safe record in overseas operations. 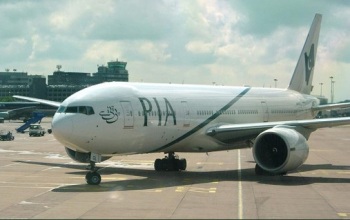 Pakistan’s first planetarium was set up by the airline on September 1, 1986. in Karachi. This photo shows a B720 aircraft, AP-AXM on display at the planetarium in Karachi.

With special thanks: Photos and idea taken from historyof PIA.com